The Bibi-Lieberman deal: A wake-up call to the world about Israel 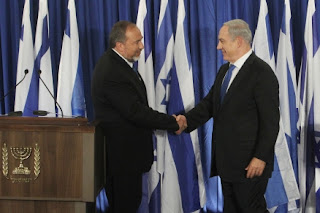 The only way Israel is ever going to give up the occupation and its habit of military aggression is by going too far – by becoming such a Goliath that the Western world finally tells it to clean up its act or find some new allies. Tonight’s union between Bibi Netanyahu’s Likud and Avigdor Lieberman’s Yisrael Beiteinu into one big Likud Beiteinu – “Likud Is Our Home” – marks a sizable step in that direction.
Netanyahu hurt himself. I don’t know whether the new party will win more Knesset seats in the January 22 election than Likud and Yisrael Beiteinu could have won separately, but Netanyahu has dirtied himself in the eyes of the world, including even a lot of his mainstream Jewish supporters in the United States. Avigdor Lieberman has a thoroughly deserved international reputation as an Arab-hating, war-loving neo-fascist (this last label having been pinned on him even by Martin Peretz, the stridently pro-Israel ex-publisher of The New Republic.)
Foreign Minister Lieberman calls for expelling, by means of a land swap, hundreds of thousands of Israeli citizens simply for being Arab. He ran an election campaign highlighted by the slogan, “Only Lieberman understands Arabic.” He was a member of Kach in the late 1970s, which he understandably denies but which Kach veterans from that era swear to. He’s fantasized aloud in the Knesset about executing Arab MKs and threatened to bomb Egypt’s Aswan Dam. Plus, of course, he’s been under Israel Police investigation for corruption for nearly 15 years, and could face indictment pretty soon.
And now Netanyahu, who made Lieberman his right-hand man during his first term as prime minister, has identified himself completely with this guy. There was a report tonight by Channel 2′s well-connected Amnon Abramovitch that the unity deal calls for Lieberman to take over as PM in the fourth year of the next term, which Likud Beiteinu is likely to win in the upcoming election.
A lot of people in Israel, the U.S., Canada and maybe some other countries, and certainly a lot of Jews all over the world, think Netanyahu is a centrist, if for no other reason than that he demonstrably represents the Israeli consensus. But even these people realize that Lieberman is not a centrist; he’s Israel’s answer to Jean Marie Le Pen, the late Jorg Haider, Geert Wilders and other enthusiastic Muslim-bashers, only he’s more militaristic.
And now there’s one more difference – unlike Le Pen, Haider and Wilders, Lieberman and his party have become one with their country’s prime minister and ruling party.
What does this say about Israel’s unchallenged political leader, and what does it say about Israel? A lot of moderate-minded people here and overseas who were ready to give Bibi a pass, who even came to admire him, are now, I believe, feeling a little ill. It’s a terrible night for this country, but unfortunately there’s no other way it’s going to get right, if it’s ever going to get right, than by going on like it’s been going for the last several years until it crashes into the wall, into the limits of Western tolerance. There are worse, more painful ways for this to happen than by the raising up of Lieberman. On present-day Israel, at least, Lenin was right – things have to get worse before they can get better, and they sure as hell got worse tonight.
Tweet
Publicado por Blog de Carlos Braverman en 6:09 p. m.